AOL Has The Top Advertising Network By Reach

ComScore released numbers today on the top Ad Networks online. They found that in March, AOL was the top network reaching 9 out of 10 consumers online or 90.7%. Yahoo came in a close second with 85.3% and Google in third 80.9%. The AOL numbers also include Advertising.com. 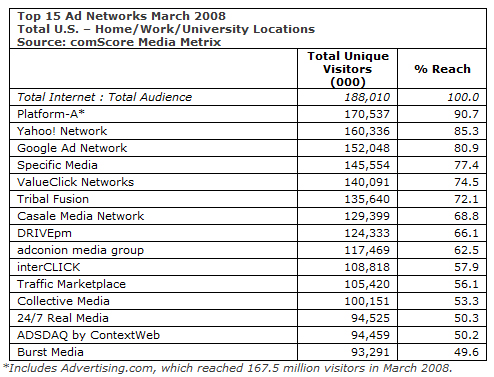 Maybe I missed it, but where is Microsoft in all this? I don’t see adCenter in these numbers.

Also, this is interesting in light of AOL and Yahoo talking recently. We’ll see what happens with this one!

Updated: Center Networks is reporting that AOL announced today that they’ll also be managing the mobile and online ads for Verizon.

Earlier this week, we launched a major website change for Chris Johnson and the Johnson...

I’ve been wanting to try the new Google Ad Planner for some time now, since I have...

Big news today from Adobe. They’ve announced that they are releasing technology to...

I just ran across a post on Search Engine Watch that does a great job of highlighting the...

This site uses Akismet to reduce spam. Learn how your comment data is processed.